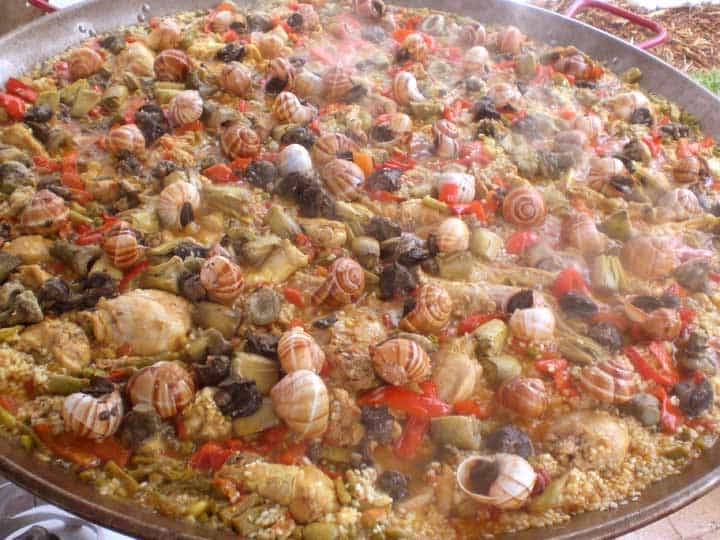 Just like many argue about what ingredients constitute the best Cajun versus Creole Gumbo, paella aficionados in the know are often in dispute about what to use in Spain’s most authentic dish, as the ways of making paella are as many and varied as the people who cook it.

My money is on Juan Ten, the man with the pan, who was born in his parents (Salvador and Lola’s) native Valencia, raised in Madrid, has a thriving Real Paella business in Tallahassee, and is now residing part time in South Walton to bring his family recipes, passed down from generations before him, to the Emerald Coast.

As a growing boy, Juan paid close attention to his mother, Lola, as she cooked authentic paella with fresh local ingredients for family and friends gathered around their giant pan. Ten said, “I learned how to make paella when I was a teenager. My grandfather Salvador Ten Montoliu (1897-1974), was a chef and the inventor of the first gas furnace retrofitted to cook paellas (paellero de gas), a patent registered in 1950.”

Juan relocated to Tallahassee twenty-five years ago and in 2006 founded Real Paella with his daughter Alicia, who has worked alongside her father for the last 9 years in their family-owned business. Juan re-creates the paella experience catering for private parties and public events, large and small.

Adding to the excitement of the paella experience is multi-award winning master classical and flamenco guitarist Silviu Octavian Ciulei who provides the magical musical touch. He was born in Constanta, Romania, began his musical studies at the age of six and attended the High School of Arts in Constanta. By age thirteen, he had won his first performance prize, and Acoustic Guitar Magazine quotes, “He’s delighted audiences and taken first prize in an impressive number of international competitions.”

A fun and relaxing atmosphere is set as dining guests gather around the authentic paella pan while sipping on refreshing hand crafted sangria and savoring the rich, aromatic notes of roasted garlic, spices, seafood and saffron rice as it simmers.

Juan says, “I use local organic ingredients and proteins from New Leaf Market, the farmers markets on 30A and fresh Gulf Seafood, with the exception of the authentic rice, Spanish olive oil, saffron and smoked paprika which are imported from Spain. The products we use have no artificial color, MSG or preservatives”

Paella is basically a simple yet fragrant mixture of ingredients using rice from Spain’s eastern coastline, the region where paella originated centuries ago. Early paellas were cooked outdoors over wood-burning fires for peasant farm workers.

“In Spain, there’s a long tradition of getting together for lunch with the whole family, but workers couldn’t come in from the fields to do that. So, they cooked for themselves while in the fields. The original paellas had rabbit, land snails, and whatever vegetables they had on hand, and were eaten straight from the pan”, explained Juan.

If looking for a true farm to pan experience, Juan’s Real Paella website offers a variety of choices for customers seeking his catering expertise. The six paella options are, Valenciana (the closest to the original with chicken, duck or rabbit), Tipica (with chicken and pork), Marisco (a seafood packed paella with fish, scallops and mussels and vegetables), Mixta (Tipica with seafood added on top), Vegetal (vegan vegetable paella), and my favorite Langosta brimming with succulent lobster, mussels, scallops and shrimp.

A paella party package can include paella only or paella, tapas, salad, dessert, sangria and the famed flamenco guitarist. Juan will even arrange for tents, tables, chairs and dinnerware if needed, and he is prepared for rain. Prices are reasonable and he is currently offering specials on his website, www.realpaella.com. Juan says, “We recommend you telling your guests to arrive early while we are still cooking. Part of the experience is to watch the process of making authentic paella!” For more information call (850) 980-1650 and follow Real Paella on Facebook.

Susan Benton is the owner of 30AEATS.com where she shares her passion for food and travel, and her commitment to promoting local farmers, fisherman, chefs, artisans and restaurants along the Gulf Coast.

TO GET A QUOTE