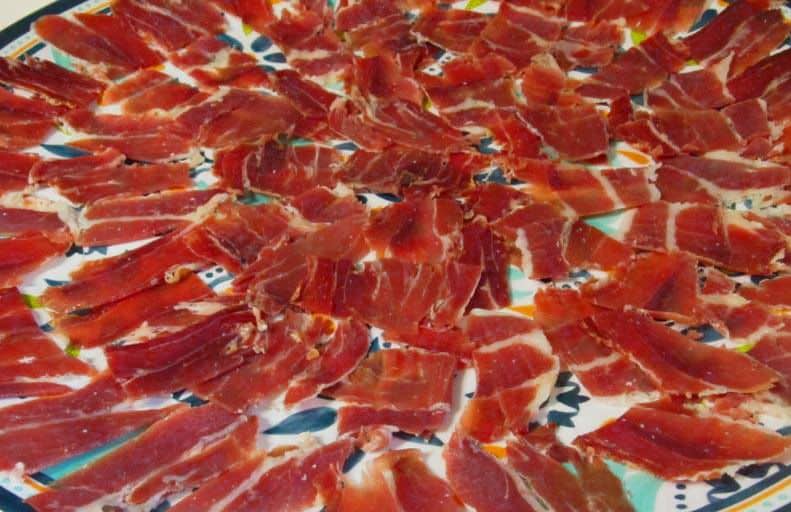 Serrano ham is one of Spain’s most valued culinary treasures, a symbol of centuries of history and tradition. To the rest of the world, it is simply one of the richest gourmet delicacies available today.

It is a dry-cured Spanish ham, which is generally served raw in thin slices. The fresh hams are trimmed and cleaned, then stacked and covered with salt for about two weeks in order to draw off excess moisture and preserve the meat from spoiling. The salt is then washed off and the hams are hung to dry for about six months. Finally, the hams are hung in a cool, dry place for six to eighteen months, depending on the climate, as well as the size and type of ham being cured. The drying sheds (secaderos) are usually built at higher elevations, which is why the ham is sometimes called mountain ham.

The people of the Iberian Peninsula ate pork and ham in their diet, even in the Roman era. However, when the Moors conquered the Peninsula, because of their religious beliefs, eating pork was prohibited. After the Christians regained control and forced the Muslims and Jews to either convert or go into exile, pork regained its popularity.

It is important to distinguish the two main hog races that are used in the production of Spanish hams.

The highest quality hams come from the Iberian blood line, which are descendents of the wild boar. They are produced in the southwestern region of Spain, where they are free to roam the abundant mountain forests, known as ¨dehesas¨ in Spanish. They live off of the acorns (bellota) provided by the cork-oak trees .

Iberian hogs have long legs, pointy snouts, and dark skin and hoofs (giving them the Spanish name ¨Pata Negra¨). This race is defined by its genetic ability to store large fatty deposits that become part of the muscular mass and create the white fat that gives Iberian ham its uncomparable marbalized texture and aroma. It´s worth pointing out that only 5% of the ham produced in Spain is native Iberian ham due to expensive and inconvenient production and feeding methods.

There are basically two different types of cured hams in Spain, jamón serrano or “mountain ham,” and jamón ibérico or “Iberian ham.”

Jamón Serrano – There are almost 2,000 producers of Serrano ham in Spain. Eighteen of these producers formed the Consorcio de Jamón Serrano Español in 1990. The name Jamón Serrano is now controlled by the European Union since the year 2000 and it protects the processing of this product, although it does not apply to a specific region. Look for the label that has an “S” in the shape of a ham, and says SERRANO ESPAÑOL if you want to buy Jamón Serrano from the consortium. The mountain or Serrano ham is made from several different breeds of white pigs, such as Duroc, Landrace or Large White. They are fed mainly cereals and cured from 7 to 16 months.

Jamón Ibérico – This ham is made only from the Iberian pig. The breeding of the Iberian pig is restricted to an area in Southwestern Spain and Southeastern Portugal. Although fed some cereals, these pigs also roam countryside and feed on acorns. The curing process lasts from 14 to 36 months.

Within the Iberian race, there are three categories to be aware of, each of which is based on the feeding practices utilized:

1) Acorn-fed Ham (Jamón Ibérico de Bellota): Hogs are semi-free to roam for the last four months before being sacrificed. They are fed mostly acorns, which make up up 50% of their total weight.

2) Cereal and Acorn-fed Ham (Jamón Ibérico de Recebo o Media Bellota): Hogs are released in the mountain ranges weighing between 85 and 115 kg., where they are fed acorns and proceed to complete the fattening-up period (the maximum weight for all three categories is 185 kg) living off of authorized cereals.

3) Cereal-fed Ham (Jamón Ibérico de Pienso): More than 30% of their final weight is made up of authorized cereals. Not acorn fed.